There are times in life when you want everything to be ok but don’t want to hope just in case. Such times include the first stages of pregnancy.

In case things don’t work out.

In case it hurts.

In case it changes who you are.

In case your heart breaks.

In case you can’t go back.

8 weeks ago I realized I was late.  Yes, that kind of late.  My suspicions were confirmed when I saw the word ‘pregnant’ on one of those fancy digital tests you can get now.  A month went by and for that entire 4 weeks amongst the nausea and exhaustion I felt joy, anticipation and love for the new baby that was going to be a part of our family.

And then I saw blood.

Immediately I put my emotions in check.  Don’t get attached.  Don’t believe.  Don’t love it yet. This could end at any moment and life will go back to they way it was before.  Or would it?  I wondered if I would be the same afterward.  If I would break a little inside or if I would absorb the pain and grow from it.  Would it change things between my husband and I?  Would there be blame, understanding or distance between us?

We sat through a doctor’s appointment in an emergency after hours weekend clinic.

I had some blood tests and an Ultrasound.

The tests told us there really was a baby and this baby did in fact have a good heartbeat. We also learned it was the right size and that meant it was developing on schedule.  They told us there was a bleed on the edge of the placenta and we basically had a coin toss type situation.  Things could go on and the baby could grow or it was possible that it wouldn’t.  We just had to wait it out.  Then the bleeding stopped and I continued to feel tired and nauseous and hope crept in.  Maybe things would be ok. Maybe I could hope again.

Then there was more blood.  More doctors appointments.  More uncertainty and I built more walls around my heart and I withdrew a little bit from life while I tried to sleep and not think about it all too much.

This brings us to now.  I’m 12 weeks along and have just had another ultrasound.

Again, it showed us that the baby is the right size and that it had a healthy heartbeat.  I saw fingers, arms, legs, a stomach, brain, bladder and spine. 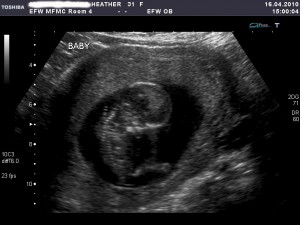 They did not see any bleeding.  It seems to have healed and I’m starting to feel healed as well.  Starting to hope again and put my heart into this pregnancy.  I want to let myself enjoy this period of time.  I want to let myself love this baby and believe that on October 27th or thereabouts we’ll be meeting the newest member of this family.  It’s going to take a bit more time before I’m really there and really believing that everything is ok.  For now, I have a bit of breathing room.  And it feels good.