My book club is awesome.  Really awesome.  Every time I go I have such a fantastic time.  One of our members was ‘warning’ us that she might attend in her pj pants because she recently had surgery and was uncomfortable in anything else.  I half jokingly said that I would love to have book club in my pj pants and that I would wear mine if the host was ok with it.  Our gracious host was in fact ok with it and a few others jumped in on the pajama band wagon.  Why not right?  Sitting around in comfy pants is how I read so why not talk about books in the same manner?

Our meeting started and people arrived – some in regular clothes and some in pajamas.  I wore my newest yoga pants with a purple snow flaked pajama top.  I was comfy but not sloppy however I certainly wasn’t expecting what came next.

Wouldn’t you know, the door flew open and along with a few whirling snowflakes came Will Ferguson, author of the Giller Award winning book 419 – the book we were all discussing.  He didn’t seem to notice what we were wearing, at least, he didn’t let on that he noticed.  A gregarious fellow, Will cracked jokes here and there and had the room mesmerized in moments.  He was eager to hear our thoughts and graciously answered questions from our members.  What I liked most about Will was his willingness to praise his editor, who he tells us, played a large part in the construction of the ending of the story. 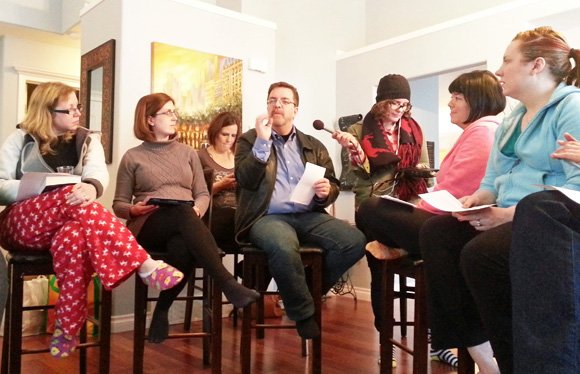 Blissful Domesticity  Working Mother Chronicles  The Dabels Divulge Will Ferguson is Center, the one with the mic is a CBC Radio gal then Marlaine and Rightmost is Hippo Hug.

419 is simply the story of a man who gets sucked into one of those spam emails from a Nigerian who can transfer large sums of money to a lucky responder.  Less simple is the web of people who are affected by these dark and deceptive dealings.  This story weaves in and out and back and forth from continent to continent  and character to character.

The writing is smooth and easy to read yet Ferguson is able to reveal a depth of information with a few sharply written phrases.  I found myself pausing to reflect on this skill of saying so much with just one short line.

Although never named, the city of Calgary is showcased in this novel and it was fun to piece together the wheres and hows of the setting.

Give it a read, it won’t disappoint! 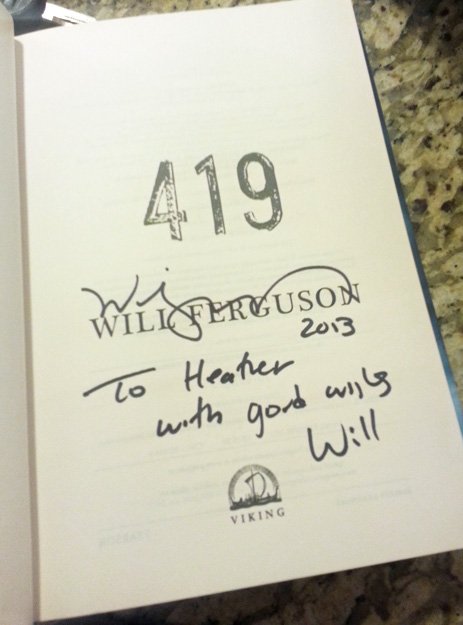