There are many reasons behind my decision to give up wheat flour and grains and they are all working out for the best.  Most things I was happy to leave behind – bagel?  Who cares.  Pizza?  Mmmmmmmmmmm that one was tough.  Pancakes are another item that I felt myself longing for but the nutritional value just wasn’t there to justify stuffing one into my mouth no matter the fluffy maple syrupy flavor they possessed.  Most gluten free pancake recipes fell flat leaving a gritty texture on the pallet, and really, they didn’t have any nutritional value either.

But then I bought some buckwheat flour.  Buckwheat as it turns out,  isn’t wheat at all.  It’s related to rhubarb and the ‘grain’ isn’t a grain but rather a seed.  Now, there are many arguments online as to whether or not buckwheat is paleo. Some say yes because it isn’t technically a grain.  Some say no because it’s so starchy.  I don’t really care.  It’s a gluten free alternative to wheat flour that is nutrient rich.  Buckwheat was the answer to a great gluten free pancake recipe!

I added some almond flour to this buckwheat pancake recipe to up the protein and calcium and the result was a beautiful and fluffy pancake that is better tasting than a plain old white flour pancake.  I was pretty impressed with these babies and they’ll be making their way into our regular breakfast repertoire.

To make these pancakes light and fluffy, this recipe calls for separating, whipping and folding in the egg whites.  Do not be scared.  This isn’t hard.  I whipped mine with a whisk by hand and it took all of two minutes.  They don’t need to be fully whipped to stiff peaks – just soft ones.  If you used a hand mixer it would be done in no time flat. 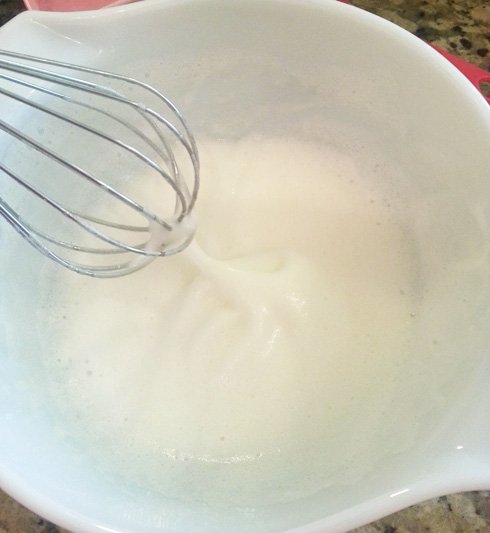 Folding the whites in is easy too – it’s basically just gentle stirring.  With a spatula, stir in a ‘bottom, up’ motion bringing the spatula down to the bottom of the bowl and then bringing up the mixture and ‘folding’ it over the top.  Don’t worry if your technique isn’t precise.  The idea is just to maintain the air in the egg whites without beating it out during the process of mixing. 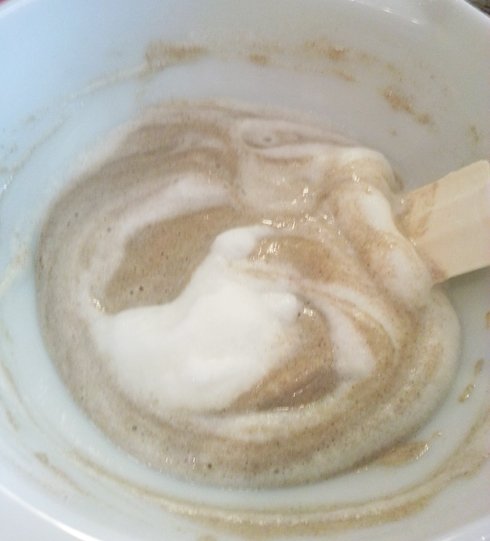 Once your batter is made, it cooks up just like a regular pancake.  Pour some batter in a med hot pan and cook until the bubble formation slows down.  Flip and cook one more minute.  If you need to – test the pancakes with a toothpick.  If it comes out clean then they’re done.  I used a little coconut oil in my pan but you could use butter too.  These cakes are darker in colour than regular ones – just keep that in mind as you’re cooking – it’s harder to tell if they’re becoming over done. 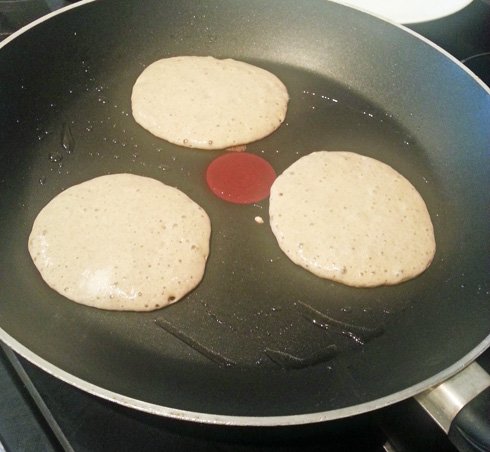 In a large bowl mix buckwheat flour, almond flour and baking powder. Make a well in the center and add egg yolks, honey and milk. Stir ingredients until mixed well. Set aside.

Pour egg whites into the rest of the batter and fold gently until incorporated.

Pour batter a half cup at a time into pre-heated pan on low-med heat and cook until bubbles slow. Flip and cook again until done.

When I saw how these turned out I heard that little girl from Despicable Me in my mind “They’re so FLUFFY!” and tasting them told me I’d never miss a regular pancake again.  The kids loved them too and asked for more.  I served ours with real maple syrup and a touch of strawberry jam but fresh berries or some strawberry sauce would be nice.  I hope you try these out and if you do, let me know what you think! 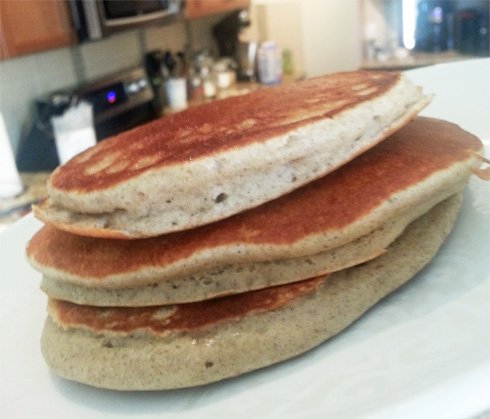 If you have any leftovers they freeze well allowing the kids to pop them into the toaster for a nutritious and quick weekday breakfast option. Just place some waxed paper in between them before you freeze. You can also keep leftovers in a zipper bag in the fridge for up to a week.