We’re about halfway there when he gets quiet.  He doesn’t like that his sister goes to school and he has nobody to play with all day.  We arrive at the school and walk around to the correct doors and he doesn’t say much.  They hug and she walks away.  He calls after her ‘Bye bye Hannah!”  At home I play with him, we colour and cook in the kitchen and we go to the park.  But it’s not the same.  He misses his sister a lot during the day.  After a whole summer of companionship there’s a void and I can’t fill it.

In the afternoon we wait for her and she comes racing out onto the playground.  They embrace and she asks him if he had a good day.  He says “Yes, now we go home and play?”  They pick dandelions on the way back to the car.  They chit chat.  For him, all is right with his world knowing his sister is at his side.  She asks him if he went on the potty and says she’s proud of him after he tells her he did. 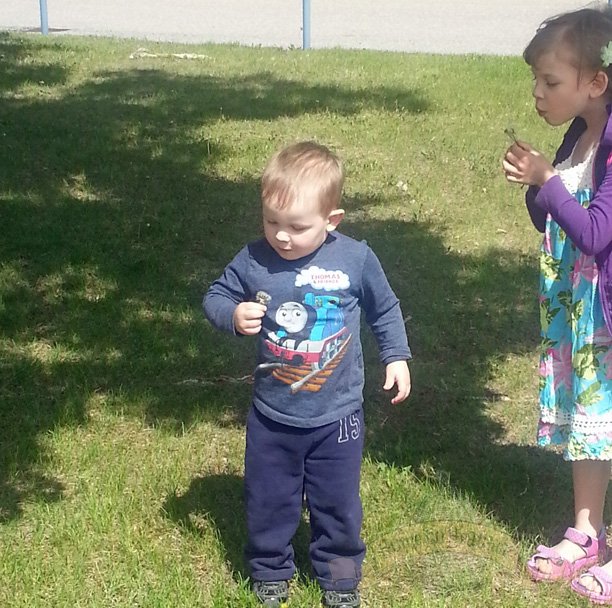 We drive back to our neighbourhood and they are silly and laughing and carrying on in the car.  I don’t even know what they are talking about but they do.  They point things out to each other “Look Hannah, a bird!”  “Yes, I see the bird, buddy.  There’s a dog over there!”  I’d like to take them to the playground, the weather is so nice and we need to make use of it before it’s gone and we’re in the depths of winter again.  But I have things to do and dinner to make and a few bits of work to cram in somewhere.  So instead I open up the patio doors to the deck.  I ask them to sit in their chairs and say I’ll be right back with a snack.

“Pudding!” they scream.  It’s a huge treat.  We don’t often have packaged sweets in the house but once in a while I make an exception – I mean, what’s childhood without pudding? And being the mom means I get to lick the tops.  It’s a rule you know.

They settle into their deck chairs with their Snack Pack treats and enjoy the sun and warmth as they slurp chocolate off their spoons.

I know they’ll be fighting again at any moment about who is sitting in what chair.  About who will blow the bubbles.  About who can make the biggest shadows.  But for the next 30 seconds things are quiet and they are happy just enjoying their treat and each others company.  I’m happy too and set to packing her next lunch so we can do it all over again tomorrow.