This summer our road trip has taken us across the mountains to Grandma’s house as they often do and so far it’s been a lovely trip.  Things just seem easier this time.  Maybe it’s because they’re older now – there’s no more lugging around playpens and diaper bags and strollers.  We’re past all the ‘gear lugging’ which is very nice, I won’t lie.  Or maybe it’s because we happened to find two of the most amazing toys to bring along for the ride.

I kept these secret until we left on our trip so they would be new and exciting for the kids.  It looks like I didn’t have to worry about that though as they’ve had them for nearly two weeks, have played with them A LOT and these toys are still holding their interest.  If you’re heading out on a road trip then check these gadgets out.

These are just like mommy’s smart phone and the kids felt so special getting a ‘tablet’ of their own!  They were playing with these the whole way to Grandma’s place and have been toting them around with them since.  These have photo and video capabilities which my 7 year old LOVED!  We really need to watch what we say now because she’s documenting every discretion via video!  It’s pretty funny but she loves to sit down and watch her videos after she shoots them so it’s been fantastic at keeping her occupied. My 3 year old is liking his too and picked up how to use it super quickly. He is into the colouring app on the VTech InnoTab 3

most.  I highly recommend these for your road travelers! 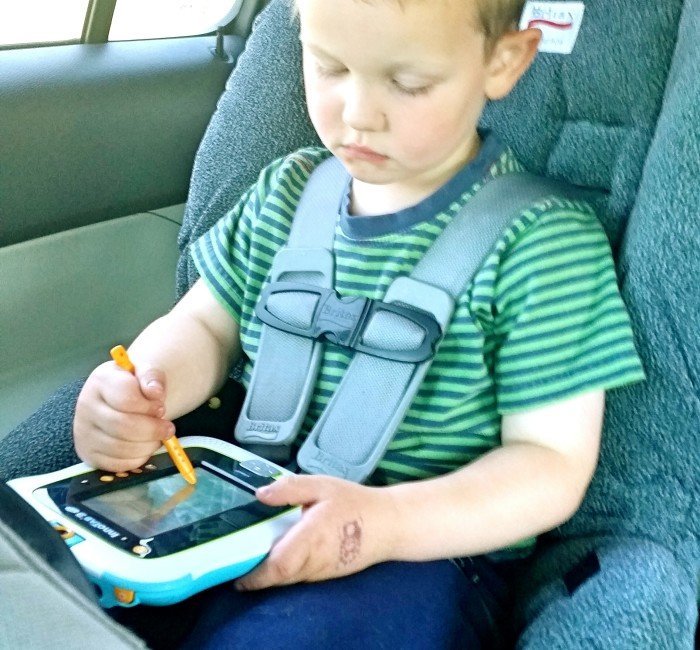 No plug in adapter included

Can be hard on batteries – invest in some re-chargables!

It’s hard to really realize the potential of the Sphero until you have one in your hands and play around with it a little bit.  This wee guy saved our bacon a couple of times so far on the trip.  The first time was as we arrived at our hotel room after being on the road all day only to find our room wasn’t ready for us to check in.  It wasn’t quite dinner time yet and we didn’t really have anywhere to go.  We absolutely did not want to sit in the car and wait until our room was ready.  We ended up sitting in the lobby of the hotel for at least 40 min.  Well, 40 min in a hotel lobby with two kids who had been strapped into seats all day could have been this road weary mom’s worst nightmare.  Instead, I pulled the Sphero out of my purse and handed over my phone for the kids to play.  They were thrilled and so was I.  This baby kept them entertained the whole time!

Now, if you’re thinking it’s just another tech toy for kids to stare at  you’re wrong.  It challenges them to use the smart phone or ipad as a remote control and this action means they are thinking about how to connect the virtual world of the ‘smart device’ to the real world that Sphero lives in.  There’s quite a thought process required to manage the function.  And you can include other items from around you as well which encourages kids to use some creativity.  Hannah has invented “Pony Bowling” haha!  It has unlimited capabilities this way – kids can build obstacle courses, mazes or whatever they can dream up for their Sphero Robotic Ball

Works on any platform – we’re using it on Android and iDevices.

Loads of apps available to play with

Comes with charger base and two ramps.

Nothing of note yet!  We’re pretty amazed with this gadget.

to minimize noise as the kids play – it’s more of a want than a need though.

*Thanks to VTech and Sphero for facilitating this post