This is my daughter’s third year in Karate.  She is 7. The first year there were as many girls as boys.  Last year there were about 30% girls and this year she is the only girl in the dojo.  It’s hard to ignore the fact that she is the lone female in the room.  The only one.  She doesn’t seem phased by this at all and that could be because she has a brother.  Nevertheless I’m so pleased that she’s found a love for karate and I hope it’s something she keeps up for a long time.  Aside from the obvious physical benefit to the sport, there is something amazing about being a little girl in a male dominated sport.  I think Karate and many martial arts are incredibly empowering for girls and here are 8 reasons why: 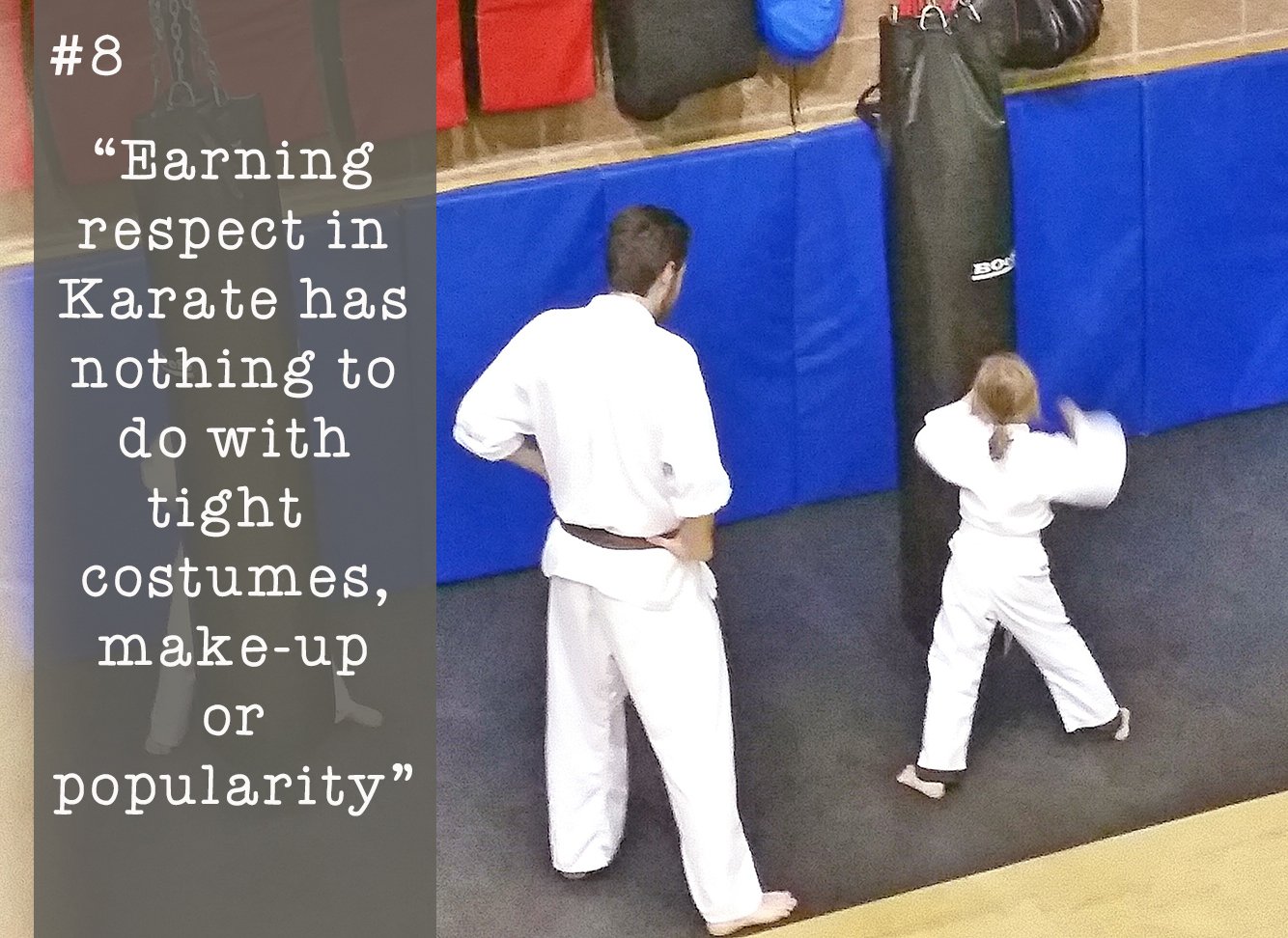 There are no ‘girls pushups.’ It isn’t girl’s hockey or a dance class where there’s usually one boy who plays the boys roles.  There’s a right way to kick and a wrong way and it has no bearing on if the student is a boy or girl.  While she may be the only girl in the class, it doesn’t change the way karate is taught.

2) She is using her Power

This wee child is standing in a room of her peers and putting forth all her effort.  She is punching the heavy bag.  She is screaming (Kia!) She is being her strongest and fiercest self.  Participating in a karate class normalizes this display of power.  She isn’t on stage performing an act, she isn’t playing as part of a team to win a game, she is using her body and her mind to be powerful.  End of story.  While she might be shy to sing clearly in a recital or may pass the soccer ball to a player with better skill – in Karate, there’s nobody to count on but herself.  Everyone else in the class is showing power and so is she.  It’s normal.  Being powerful is normal and celebrated.

3) She Knows it’s Okay to be Physical

When I was a little girl and a boy pulled my hair or tackled me on the playground I laughed nervously and waited for him to stop.  I didn’t know that I could push him off of me.  I didn’t know that I could fend for myself in a physical way.  I had no brothers to tumble with.  Karate teaches little girls that being physical is okay and that if the situation calls for it, a girl can kick and punch just the same way that boys can.

4) She knows she is in Control

Because Karate is an individual sport, she knows that she is in control of how she performs.  If she gives it her all and works hard and listens to the instructor then she knows she will progress.  There is nothing holding her back and her success does not rely on a team or partner.  The only head games here are the ones she plays on herself.

5) She will set goals – and Reach Them

There’s no motivation for self control, discipline and correct execution of skills like moving up in belt level.  Kids in karate line up in order of skill level so they immediately know who is ahead of them and they want that for themselves too.  I heard a child from Hannah’s class say to his mom “She’s so good, she even has two black stripes on her belt.”  This boy wants that too and he knows how to work for it.

6) She will Defend Herself

Part of the teachings of Karate is defense.  Getting out of someone’s grip, being aware of your surroundings, blocking, and staying balanced are all part of each class.  Karate teaches children that they aren’t to freeze if another has their hands on them.  My daughter is learning that she is to respond with action, she’s learning to be vocal about it, she’s learning that she does not need to submit, instead, she has choices.

7) She will Learn to Respect Superiors

Karate begins with all the students bowing to a photo of the master.  They learn that while their instructor is there to help, he is also in charge and they learn to respect their fellow students too.  A student with a greater skill level should be celebrated and if one student wins a contest of skill, he or she is bowed down to.

8) She will Learn she is to be Respected too

When she is that student the others are bowing to, she will feel their respect. It has happened a few times already.  She stood in front of them all and they all bowed down to her.  She loved it (how could she not?) She stood there with her little hands on her little hips, full of confidence and pride.  In this instance she’s not just a little girl – she’s the best in the class.  That’s something to hold onto and carry into the future. When she reaches her goals and is rewarded with the next level belt and gains the respect of her fellow students she will know it and she will learn what it feels like to be respected. The best part about this?  Earning respect in Karate has nothing to do with tight costumes, make-up or popularity. 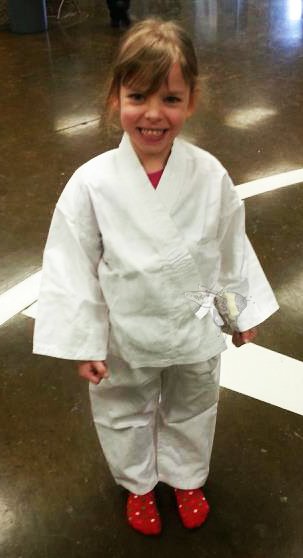 Every week I watch her in class and she makes me so proud. She loves it, she isn’t scared to take the boys on and show them what she can do. She is proud too and you can see how she revels in exhibiting her power. She screams the loudest she can, she kicks the hardest she can, she balances steady. I can see so many instances where, in adult life, she can use the skills she’s learning in karate.

There are many benefits for boys who participate in Karate too and if my son decides he wants to join I’ll be happy to enroll him.  But right now, I can see how this sport is so empowering for girls.  Sign your daughters up.  Give them the gifts of confidence, strength, awareness, power and respect for themselves and desire to be surrounded by people they admire.  If we want to put independent, strong girls out into the world, Karate lessons are a great place to start.