What do you do when you don’t think a gut job reno is a good idea financially but you HATE your ensuite bathroom?

The housing market in Fort St. John had hit a low right as we were buying this house and we didn’t know if it would continue to go lower. The current oil and gas climate has towns like this one in a state of uncertainty. Still, we had to spend at the top of our budget to get this home and we were willing to pay it because of the location. If things continued to slide, the location would ensure this home remained desirable. All this means that gutting a bathroom and doing a full reno is a risky endeavour. Would we get the value back if it turned out we had to move again in two years or less? What about 5 years? We just didn’t know. We weren’t willing to gamble our little nest egg on an ensuite and so I took matters into my own hands. 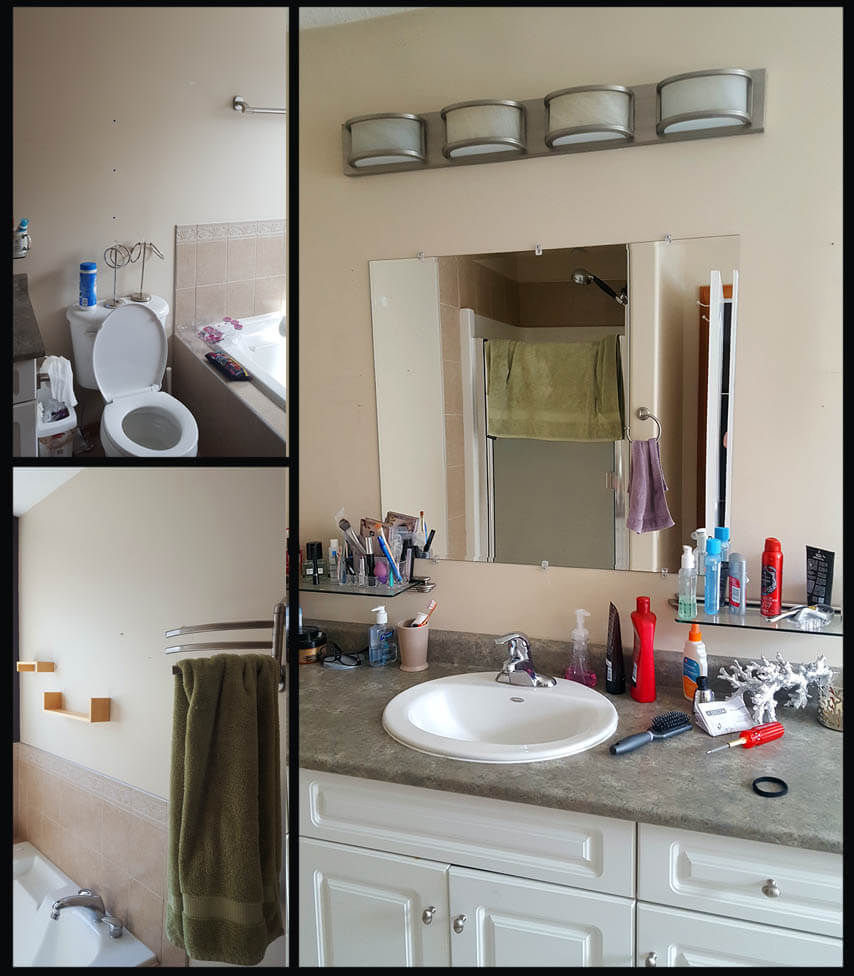 Leaving it as is was not an option for me. There was a HUGE metal magazine rack above the toilet that I’d removed before I took my ‘before’ photos – that’s how much I hated it. And there was the vinyl toilet seat that I replaced because I COULD NOT stand it. Those were just two problems. We also had towel racks in odd places – the hand towel was behind the sink? And do you stand in the tub to hang up your towel after you shower across the room? The one with the swing arms was at the door so you could brain yourself on it when you stumbled in to pee in the night. We had clutter magnet shelves that were always full of mess. We had a builder basic mirror and beige boring walls. Please pardon the horribleness in our before photos – we had just moved in and things were still in chaos. 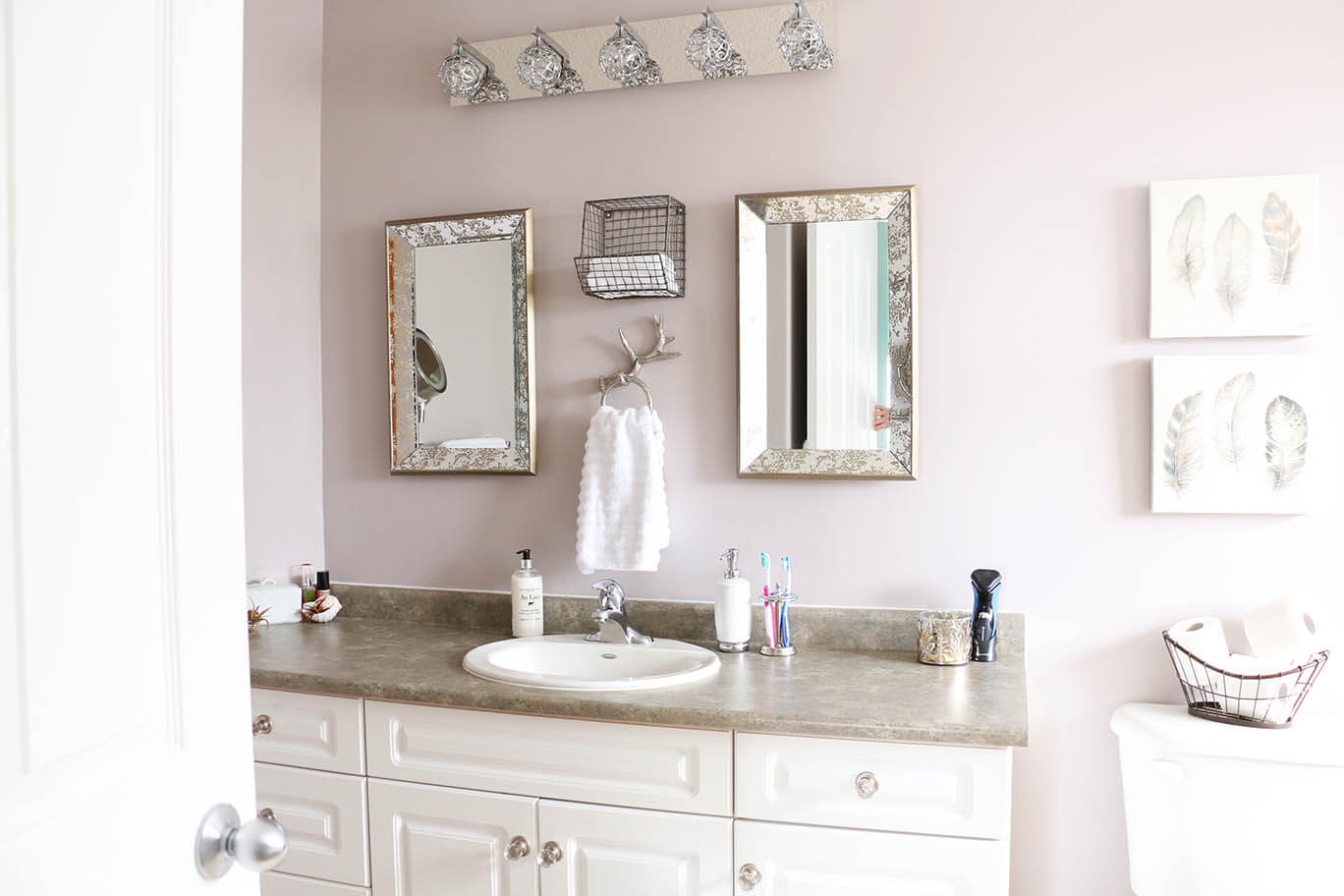 First I ripped down everything that had to go – the mirror, the shelves, the weird towel bars, the light fixture and the nick nack shelves. It left a lot of holes. A lot. I got to work filling and sanding and then I painted. I chose a grey with a slight purple tone to it. I picked this colour because it works well with the tile. Before they read peachy and now they read a bit more on the brown side which I prefer. 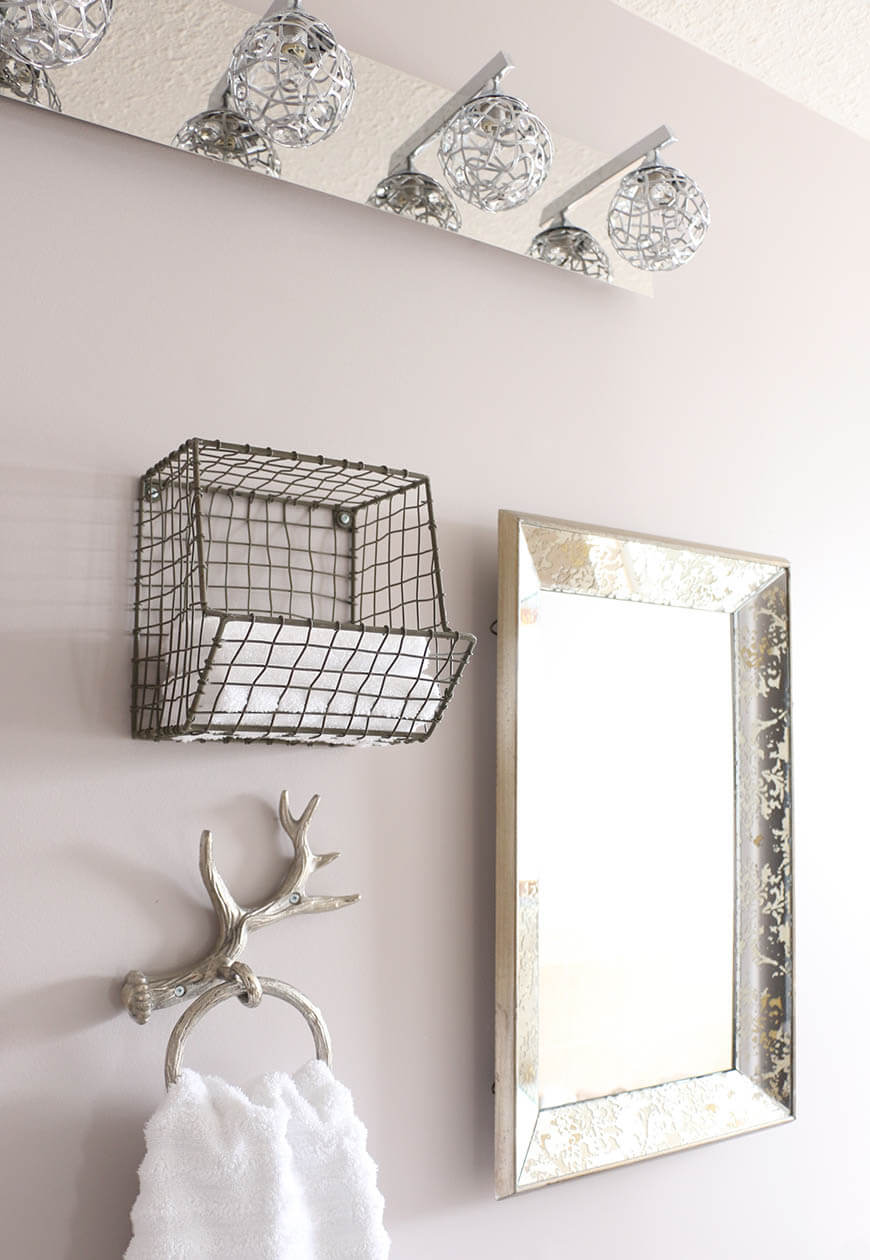 It’s so much better now! While I would like to tear out the vanity and install two sinks – this one was in good shape and wasn’t offensive with it’s simple white finish so we kept it. The counter top is grey and while it’s not stone, it’s in good enough shape that tossing it would be a waste. I did update the drawer pulls with the crystal ones from my daughter’s dresser. It was no longer fitting her needs so we replaced it but I kept the knobs and I’m so glad I did! I replaced the mirror with these pretty tray style mirrors. I do wish they were a little bigger but they weren’t available in a larger size and I liked them so much – and the price too – that I went with them and I’m glad I did. You don’t need to have two sinks to define a space for each spouse. Separating one mirror into two does the job well. 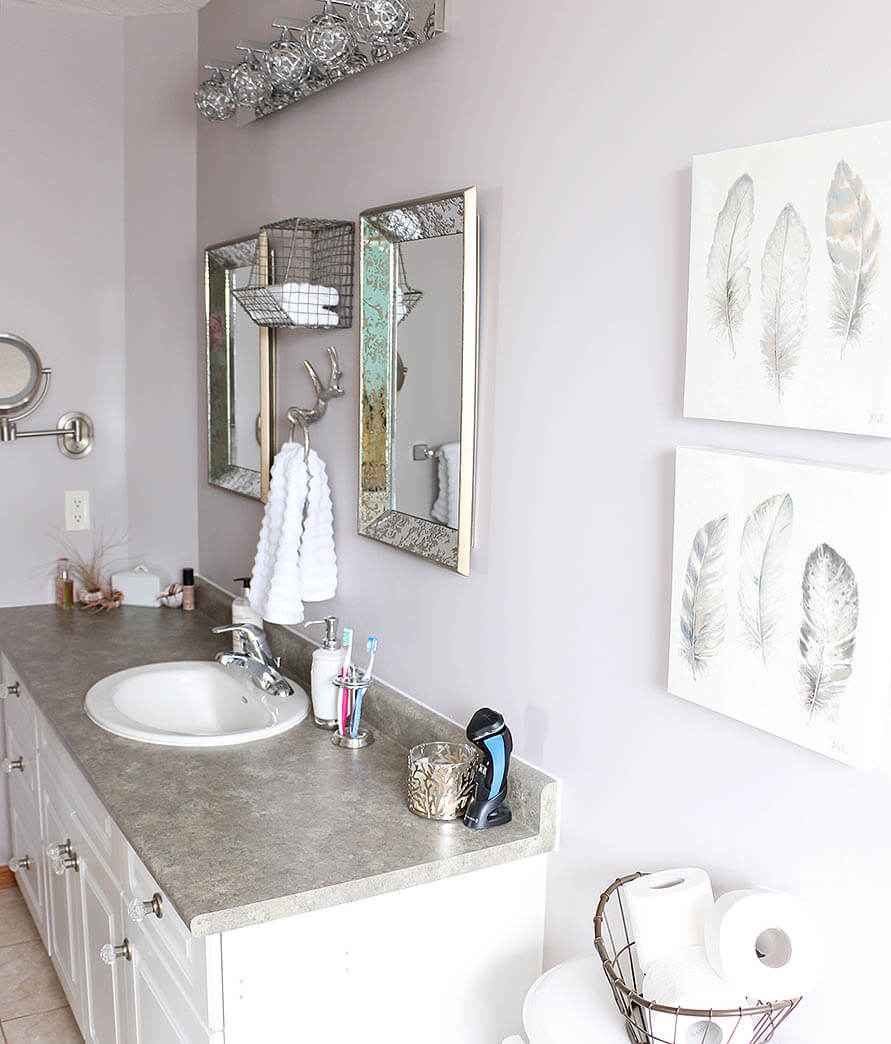 Another reason I wanted to have two mirrors instead of one is that it made space to put the hand towel holder in a better spot. I found this fun antler ring locally at the same store that I bought the light fixture. It’s so much better than turning around with dripping hands to find the towel behind you. A little wire basket above balances out the space and provides storage for face cloths or an extra hand towel. I also added a little wire basket on the toilet tank for rolls of TP as I haven’t hung the new holder yet (bad blogger!) I figured this room as complete enough to share without it 😉 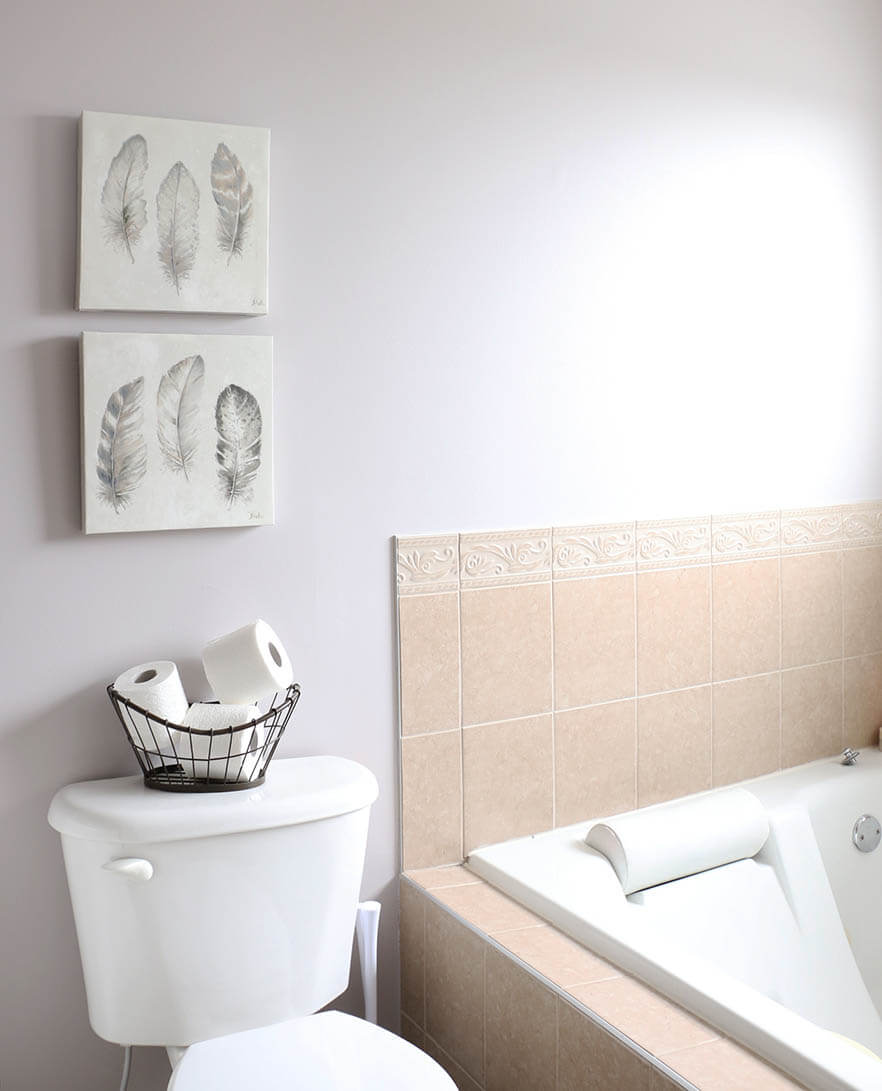 What we’re looking at here is the reason this bathroom needs a gut job. There is a GIGANTIC two person Jacuzzi tub that may have felt luxurious at the time the house was built but now – it’s an inefficient use of space. I love a good bath but the jets are noisy and require lots of maintenance to keep germs down plus filling this thing requires emptying the hot water tank not once but twice! It’s pretty ridiculous when you consider that the shower at the other end of the room is so tiny that it’s almost unusable. 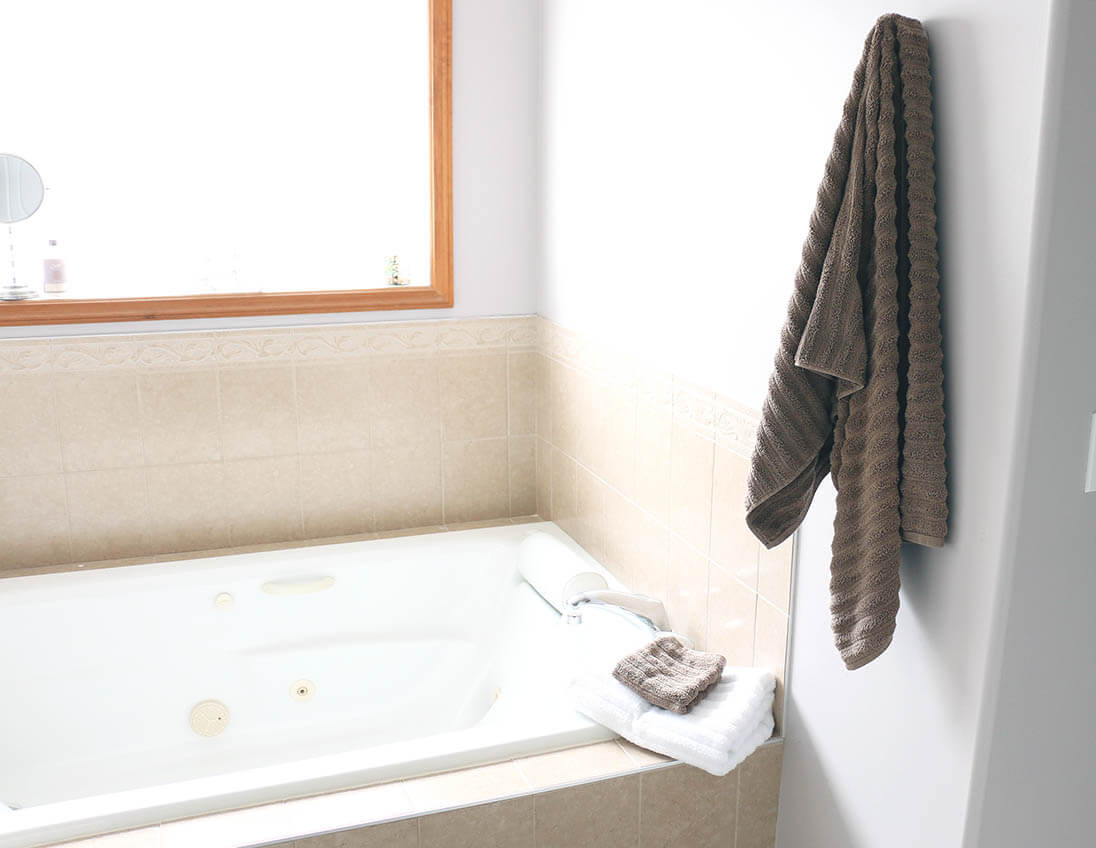 I replaced the dangerous swing arm bar with a simple hook and it’s not shown but I added a towel bar down next to that vanity mirror so it’s within reach when getting out of the shower. I love the simple feather artwork that replaced the hideous magazine rack and I splurged and bought new towels too. 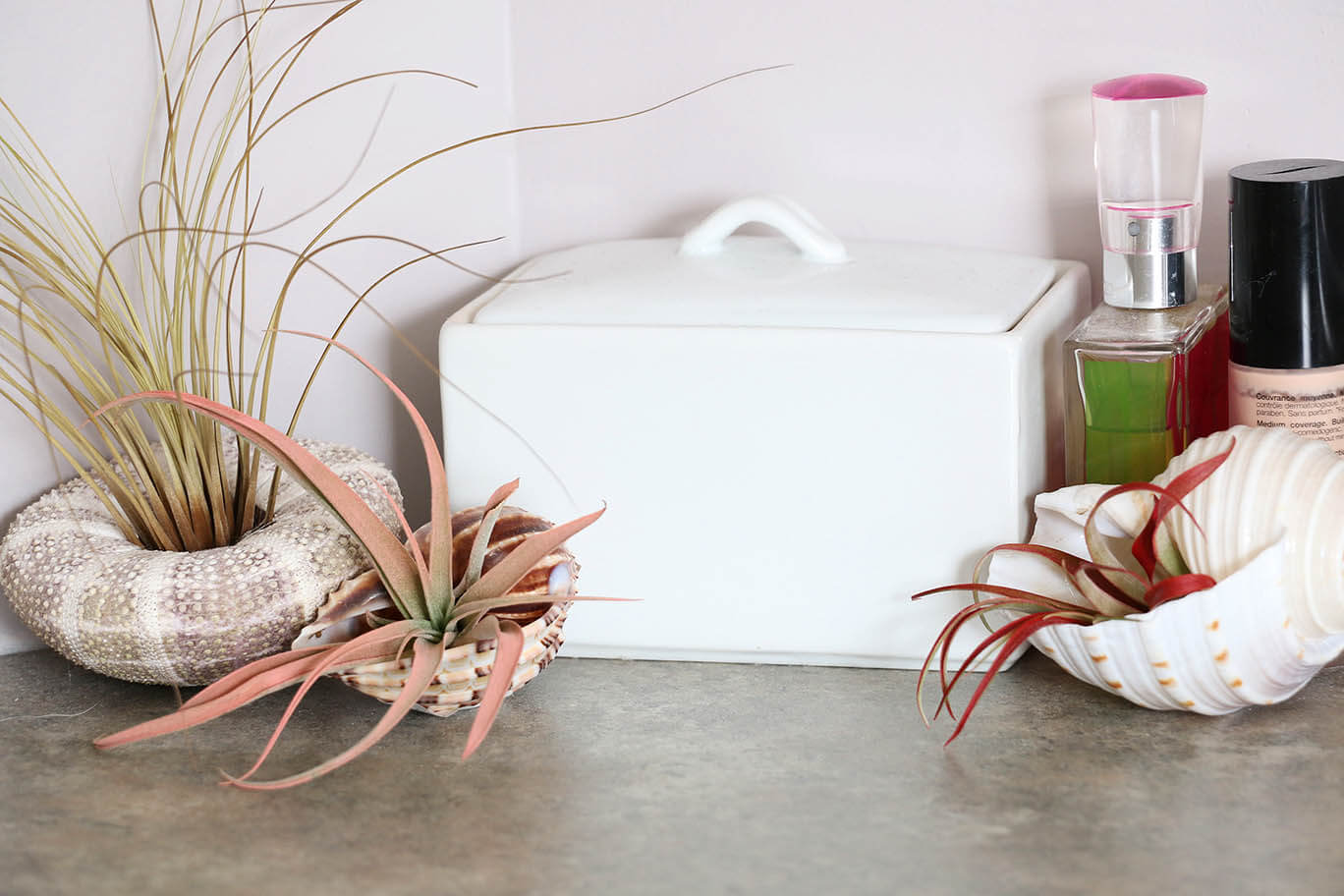 On the counter I added some fun air plants in seashells and yes, that’s a butter dish. It’s perfect for storing little bobby pins and hair ties. I am not one for fussy things and I love that we can now keep the counters clutter free because those shelves are no longer asking us to set things on them. There is plenty of storage in the vanity for everything we need. 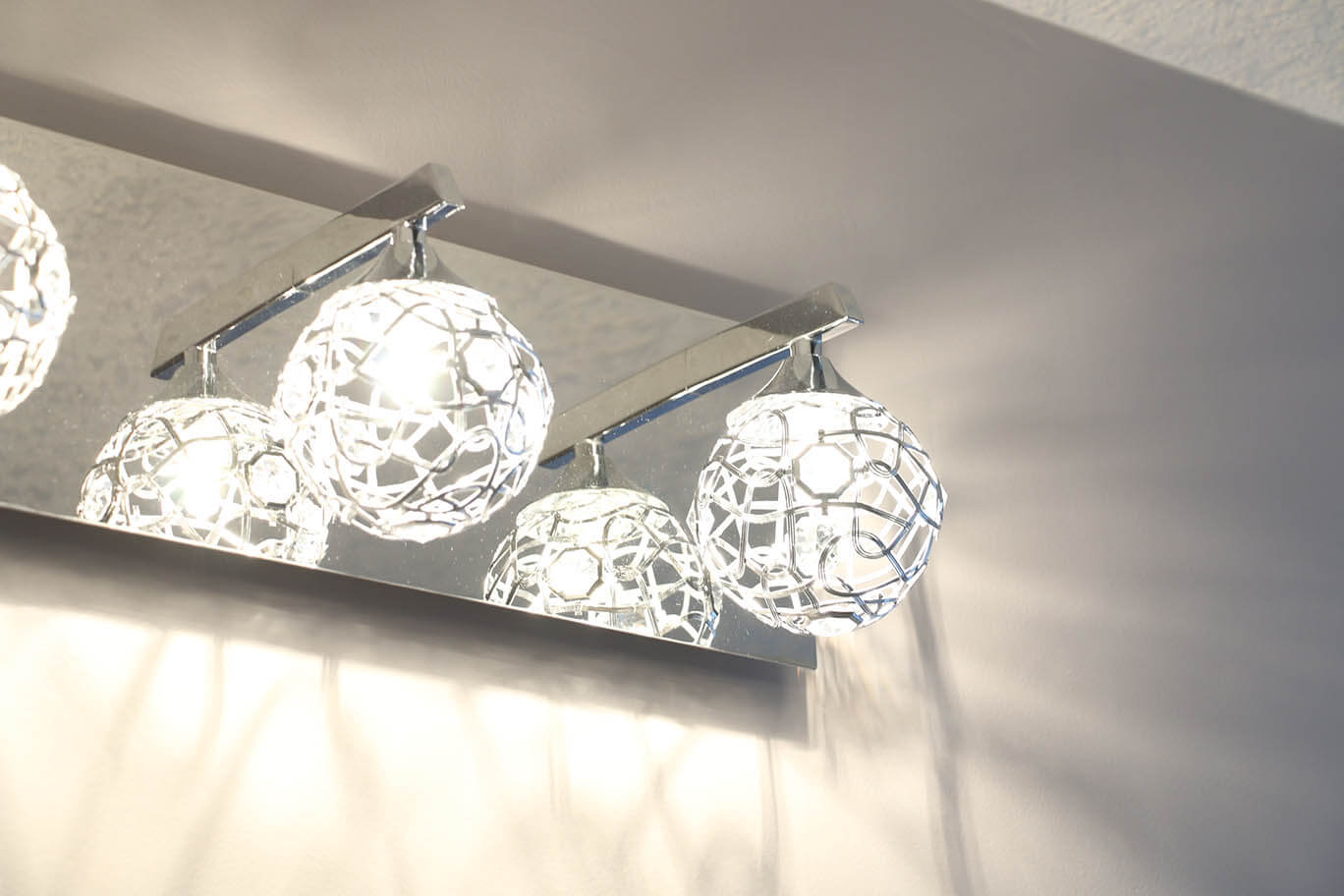 The new light fixture is pretty fun. The mirrored background throws light around and the wires create some interesting shadow patterns on the walls. I don’t know if you can really sell well in the photo but there are little crystals there too which coordinate with the crystal knobs on the vanity. 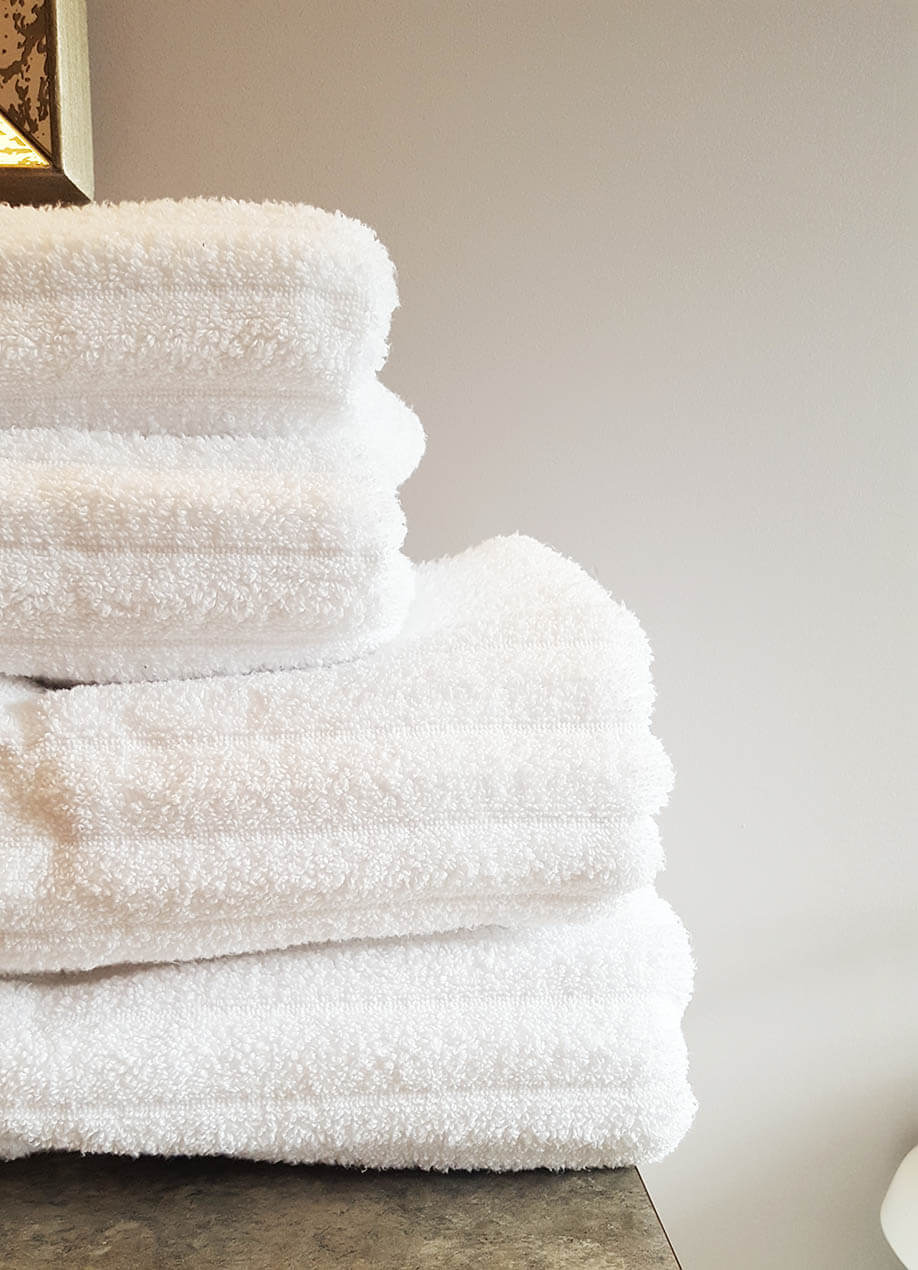 While I would like to remove that Jacuzzi and put in a larger shower the sort of budget that includes moving plumbing and replacing tile just wasn’t in the cards here. Not being able to recuperate those dollars if we had to sell this home in a short period of time meant there really was no other option but to make do with a paint and mirrors face lift. Now it feels fresh and clean and it functions better with towel bars in the right places so I’m happy with it. It’s a very pretty space and it feels like home.

The artwork is from Winners