I decided to make meatloaf.

I’d never made meatloaf before but I knew one thing going in;  I was gonna wrap that bitch in bacon.  Oh yeah baby.

I mix up the meat with some onion, celery, carrots, egg, worstershire, bbq sauce, and bread crumbs and form it all into a loaf shape on a baking tray.  “Shoulda put tinfoil over that pan,” I thought to myself.  Oh well.  There’s no going back now.

The bacon goes on and the loaf goes in the oven at 350F for an hour.

I hear the timer going and take a peek at it.  It’s looking good – but the bacon isn’t really ‘crisp’ and I didn’t wrap that bitch in bacon to have it wiggly and gross…I wanted a loaf wrapped in yummy, crispy bacon.  I can see that there’s some fat on my pan and it’s getting kinda burnt but it’s no big deal. It won’t affect the loaf.  I still have to make some rice and peas to go with it so I crank up the heat to 425F so the bacon can crisp up while I’m doing that.

10 min and I peek again.  It’s working, the bacon is getting crispy…fire alarm goes off.

I know the pan is getting torched but it’s a sacrifice I’m willing to make for bacon glory.  I yank the battery out of the fire alarm and check the rice.  It’s nearly done now.  I want to let my loaf rest and set up a bit before slicing it so it doesn’t fall apart.  I open the oven door and yeah, it’s a bit smoky but nothing I’d never seen before.  I grab my pan and start to take the loaf out.

Woah, there’s a bit more fat on there than I’d realized and the pan had warped a bit and I had to be pretty careful not to spill it all.

I get the pan out and onto the counter and realize the pan is toast.  Like majorly dead. 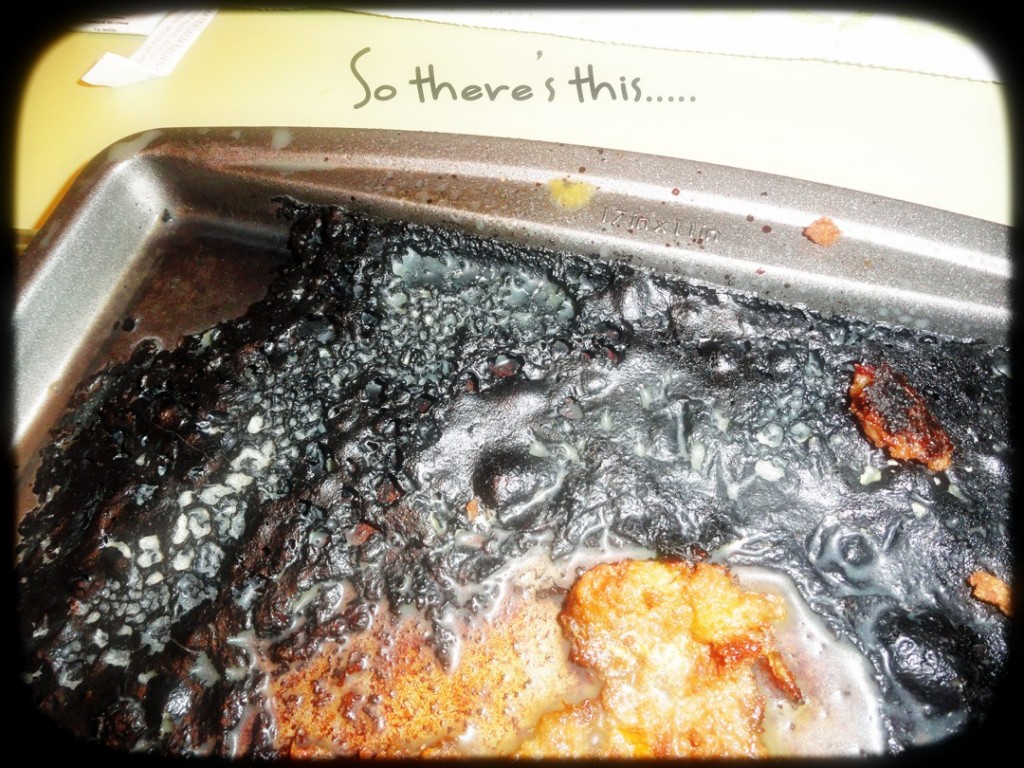 The meatloaf looks amazing though and it’s all I can do to keep from yanking that delicious bacon off the top. 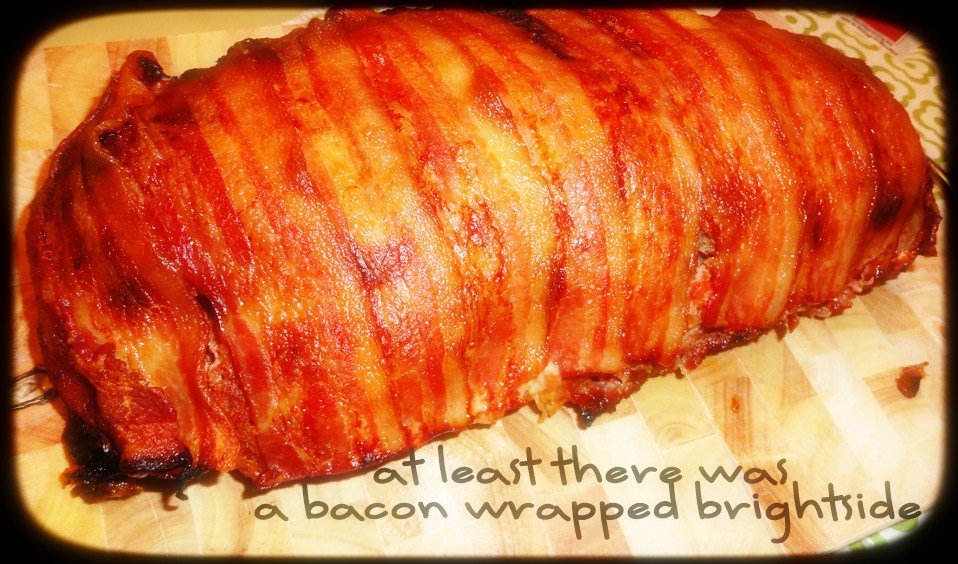 Rice is done. Check.  Peas done. Check. Kids served. Check. Rob won’t be home until late so I don’t have to worry about him. I serve myself and wonder how I can multitask something while I’m eating – I’m smart like that.  Aha.  I can set the oven to self clean because – whoa, it’s kind of a nightmare in there.

I turn off the oven and grab the box of soda and reach for the oven door – bracing myself.  It’s kind of a large flame.  I yank.

I think “Oh my shit, I’m going to have to call 911!” And then the flames get smaller and it goes out.  Just like that.

I stop my adrenaline rush, shrug and sit down to eat after opening up the windows.

It’s freaking delicious.  I made an awesome meatloaf.  Never mind how I ruined a pan, nearly burnt down the house and have an oven full of bacon grease to clean up.

Never mind all that.

I rock this stayin at home gig.

UPDATE: I found a solution to the grease problem and posted the bacon wrapped meatloaf recipe. Enjoy.